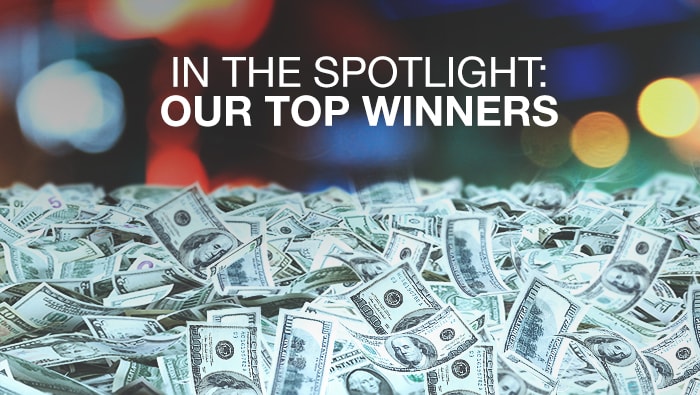 November was a month to remember at Bovada Casino. Five players won over $50,000 – each playing a different game. Find out what they were playing and exactly how much they won from each game in this top five list.

Taylor K. from Illinois reeled in the biggest win in November on Thursday the 23rd. He won $116,030 playing the 3-reel classic slot game Big Cash Win, which can pay out $50,000 in a single spin.

Two table games made it to the top five winners’ list for November, and Let ‘Em Ride paid more. Illinois Bovada player Stamatis D. collected $76,198 on November 16 from the classic variant. The game has a progressive jackpot that’s teetering over $92,000 as we go to press.

Most top casino winners’ lists include the 5-reel Egyptian-themed slot A Night With Cleo, as this game offers big progressive jackpots and the opportunity to double every win you trigger. On November 12, Chris W. from Massachusetts pocketed $65,427 playing A Night With Cleo at Bovada. Well done, Chris.

The second table game to make it onto the top five winners’ list is Tri Card Poker. Joseph Donald S. from Ohio won a cool $54,612 playing the classic version of Tri Card Poker on November 26.

Frogged, a 5-reel video slot that features the same street-crossing amphibian of the ‘81 classic Frogger, paid out in a big way on November 16. Brian K. from Nevada won $50,087 helping Frogged cross the reels.