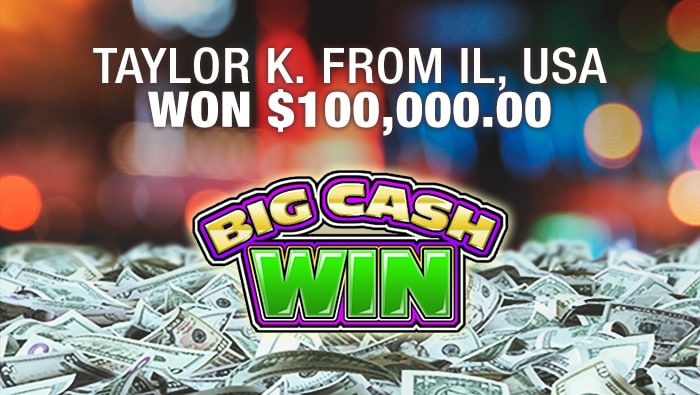 One of our players struck a celebration-worthy win playing in the slots section of our casino last week. The game of choice was Big Cash Win – a simple 3-reel, 1-line slot game with a traditional design and a money-inspired layout. Taylor K. from Illinois was playing it at just the right time, as he managed to trigger a big cash win of his own, totaling $100,000. Congratulations Taylor. We hope you treat yourself to something big.

Big Cash Win is as straightforward as slot games come. Every time you spin the reels, traditional icons, such as the BAR, cherries, 7’s and the game logo, land on the reels. Two icons pay when just one lands on the payline. Other icons require two or three to land on the payline in order to generate a win. The highest-paying icon of them all is the Big Cash Win game logo, which pays when one, two or three land on the game’s payline, creating three tiers of payouts. See if you can become a top-tier winner like Taylor K. by playing today.