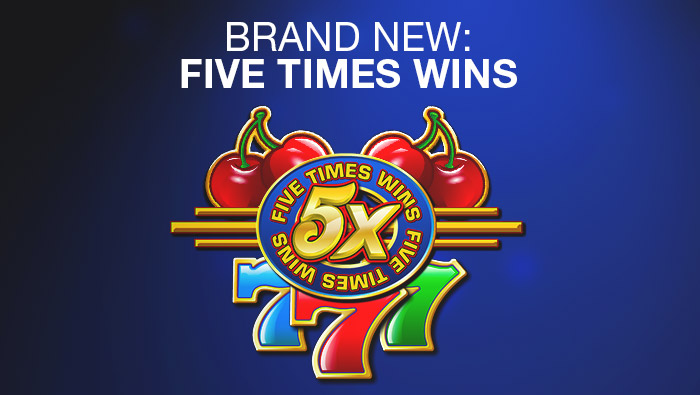 When I first sat down to test 5X Wins, I was a bit sceptical. I usually gravitate towards 5-reel slots with storylines. But after a few spins, I started to understand the appeal of the 3-reel varieties. The interface is classy and not crowded by graphics, the sound effects are reminiscent of physical slot machines and the payouts are clear and easy to understand. Simply put, you know what to expect with every spin.

The interface of a slot game is important; that’s where first impressions happen. As for 5X Wins’ interface, it’s simple, but well-designed. With a visible paytable taking up half the screen, keeping track of payouts is easy. That’s not to say the payouts for 5X Wins are complicated; they follow a simple three-of-a-kind wins format, meaning three cherries will get you x amount of winnings. But how many coins you win from those three cherries depends on how many coins you wagered, which is why the visible paytable is a handy feature. On top of being affected by the amount wagered, the payout is also affected – or I should say improved – by the presence of a wild icon: the “5X” symbol.

Every time the 5X wild subs in to create a winning line-up, your payout is multiplied by five. If you only ever wanted one bonus feature with a slot, a multiplier would be it. A multiplier is pretty much guaranteed money whenever it accompanies a winning line-up. If you were to land, let’s say, two green 7s (the third best line-up in 5X Wins) and one 5X symbol on a three-coin wager, the 120 coin payout awarded for landing three green 7s would jump to a cool 600. That’s as sexy as math gets.

Between the swanky jazz soundtrack, the potential for quintupled winnings and the easy-to-follow gameplay, I’m confident that 5X Wins will become an instant hit with all sorts of players. Sometimes all we need is a classic game with a solid multiplier.