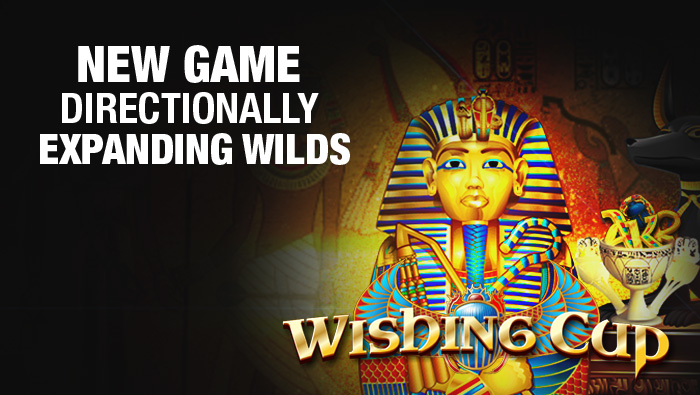 Summon the immortal powers of King Tut’s alabaster chalice when you spin the 5-reel, 25-line slot, Wishing Cup. If you’ve ever been intrigued by this great emperor and his lost civilization, give Wishing Cup a try. The ruler of the 18th dynasty will add some serious gusto to your game.

The makers of this impressive slot have clearly done their research as evidenced by symbols like the crook and flail, the golden ankh, statues of pharaohs, ancient daggers, and scarab jewellery to name a few. Keep in mind that many of these items were actually buried with the late King in order to bring good fortune into his next life. If you’re interested in adding a bit of that ancient luck to your game, be sure to spin those symbols just right.

Let’s get spinning—here’s what you’ll need to do to collect the best rewards.

Firstly, watch for Horus, the god of the sky. He’s easy to recognize because he has a human’s body and the head of a falcon. If you find him, he will pay up to 750 coins. Also, watch for Anubis, god of mummification, who also has the body of a man but the head of a dog. If you’re lucky enough to track him down, he’ll offer you up to 1,500 coins. And finally, the highest paying symbol in the game is Osiris, the god of the underworld, who is recognizable by his green skin. This little symbol will pay up to 2,000 coins.

To trigger the game’s free spins mode, try to land three Gold Pharaoh scatter symbols—the more you manage to land, the more free spins you’ll get! Also, the Wishing Cup symbol is an expanding wild and substitutes for any other symbol to create even more winning combinations. Plus, you won’t be disappointed by the animation that accompanies this symbol, so keep an eye out.

If you’ve got a taste for adventure and love the dark and powerful ways of an ancient empire, Wishing Cup, at Bovada Casino is an experience you’ll really enjoy. For a limited time, use code: NEWGAMEBV when you try the game and you’ll receive an exclusive 125% match bonus for up to $125.