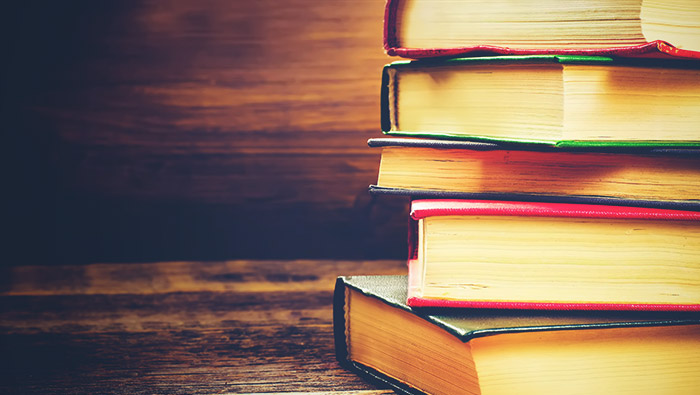 No matter what skeptics say, it is possible to become a professional blackjack player. It takes a lot of hard work and dedication, and it’s not a very glamorous job, but if you’ve got the brainpower and you’re willing to put in the time, it beats flipping burgers. Start with these five books to help you get your feet wet on the felt.

The World’s Greatest Blackjack Book (Lance Humble and Carl Cooper, 1980)
This hefty tome (432 pages) has been called the Bible of blackjack. It provides a basic introduction to the game for beginners, covering the rules and the odds, then launches into betting strategies and card-counting. The High-Opt I and High-Opt II methods are both covered here, along with some more advanced techniques.

Professional Blackjack (Stanford Wong, 1975)
Wong (aka John Ferguson) is a charter member of the Blackjack Hall of Fame, and he’s penned several books that belong on your shelf, including Basic Blackjack (1992) and Blackjack Secrets (1993). I recommend this one first. It’s the book that made Wong famous in blackjack circles, revealing the popular high-low counting strategy and discussing other approaches tailored for different rule variations.

Beat the Dealer (Edward O. Thorp, 1962)
Subtitled A Winning Strategy for the Game of Twenty-One, this book was the genesis for all the other ones on the list. Thorp was a professor of mathematics, and while he was working at MIT, he used their computers to prove that card counting could flip the house edge in favor of the player.

Blackbelt in Blackjack (Arnold Snyder, 1983)
Like Wong, Snyder was one of the first inductees into the Blackjack Hall of Fame, and he’s published several books on the topic. This one, subtitled Playing 21 as a Martial Art, talks about card-counting systems, but also deals with bankroll management and casino surveillance.

Bringing Down the House (Ben Mezrich, 2002)
To get an even better sense of the larger realities behind pro blackjack, it’s hard to beat the book that eventually became the 2008 hit film 21. Don’t trust the movie version; the book has its own fictional elements, including composite characters, but it does a very good job of explaining the inner workings of the infamous MIT Blackjack Team. If you’d prefer a more direct account, Jeff Ma (recreated as Kevin Lewis in Mezrich’s work, and Ben Campbell in the film) wrote about his time with the MIT team in the 2010 book The House Advantage: Playing the Odds to Win Big in Business.

Ready to test your newly acquired skills? Bovada Casino offers 8 versions of online blackjack. Why not try them all?