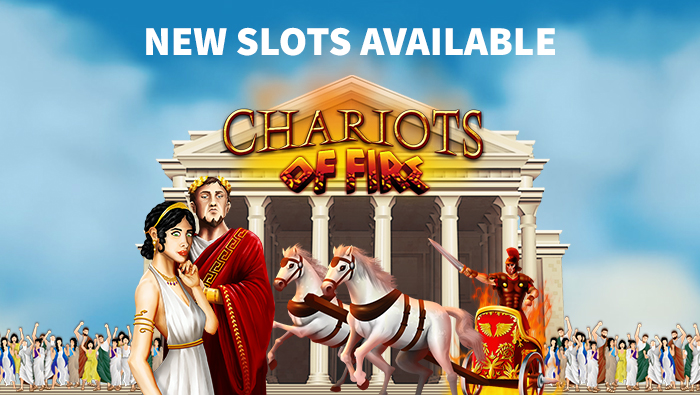 If you haven’t visited the slots section of bovada.lv lately, you’re in for a treat. The hottest new video slot games, Chariots of Fire and Dollars to Donuts, will have you wondering where these games have been all your life. The crowds of the Roman Empire and the dream world of a donut heaven will excite your senses and take you to new heights in slot play. Check out the New Games section today for a first peak.

With the Pantheon as your backdrop and citizens of the Roman Empire cheering on your every move, Chariots of Fire transports players to a time where riches were won under the glory of Caesar. This 5-reel, 25-line slot offers enormous payouts from 3X to 600X depending on the results of your spin, and the glory of the Roman people.

The sign of the Roman Legion, an Eagle Flag, will grant you an expanding wild on reels No. 1, 3 and 5 during regular play. The expanding wild will make the entire reel wild and helps to complete combinations with other symbols. Another source of good luck is the Roman Soldier icon. If you land three or more Roman Soldier icons during a spin, the Free Spins mode will be triggered, which rewards players with eight free spins with a 2X multiplier. If three Super Soldier icons land during the Free Spins round, the Roman Victory Round is triggered. This mode provides players with two Victory Spins, a 2X multiplier and the bonus of having the first the third reels become wild for the duration of the Victory Round.

What’s better than a delicious donut? A donut that pays out a 5,000-coin jackpot! With Dollars to Donuts, frosting and sprinkle-covered pastries will rain down on you, and with them, come big time payouts.

This 3-reel, 5-line slot mixes in sprinkled BARs and 7s, and glorious donuts to keep mouths watering and reels turning. The Dollars to Donuts logo is the most sought-after symbol in the game. Land three of these wilds while wagering three coins, and you’ll reap the rewards of a 5,000-coin payout. Add a wild Dollars to Donuts logo to any other two matching symbols, and watch it complete a set of three for a win.

These two new slots offered by Bovada will have online slot players feeling the glory of Rome and the beauty of unlimited donuts in one spot. Visit now for your chance to try these exciting games.