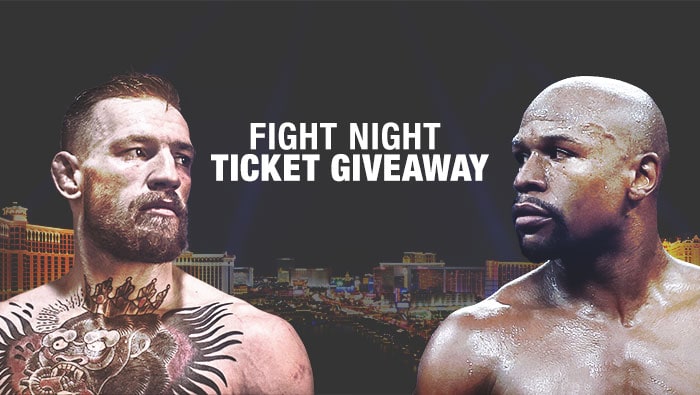 You can be in Vegas for the Money Fight

You’ve got a shot at being ringside in Las Vegas on August 26 when UFC Champion Conor McGregor makes his professional boxing debut against fighting immortal Floyd Mayweather, in what’s been dubbed the Fight of the Century.

Bovada wants to send you to the Entertainment Capital of the World as two bitter rivals stand toe-to-toe – and all you need to do is get social.

Simply refer your friends to Bovada and when they make a deposit into their account, you’ll both be in the running to score an all expenses paid fight night experience of a lifetime.

Tickets to the Fight

The most talked about tickets in town – a pair of lower section seats at T-Mobile Arena in Las Vegas, close enough to the ring that you can hear every punch and see the sweat fly.

Bovada will fly you to and from Vegas and make sure you’re on the strip ahead of the showdown.

You’ll be staying at the iconic Caesars Palace hotel, home to some of the biggest headline acts in showbiz and one of the most well-renowned casinos in all of Vegas.

To make sure you have a good time, we’ll be filling your pockets with $250 in spending money – yours to do as you please.

To make sure you have everything you need to know ahead of your trip, here’s some facts on the big fight:

How to Enter the Draw

Getting your name in the draw to win tickets is easy:

You can get unlimited entries into the draw, and a winner will be randomly selected on August 21 – so get referring and like the Bovada Facebook page and follow us on Twitter, where the winner will be announced.