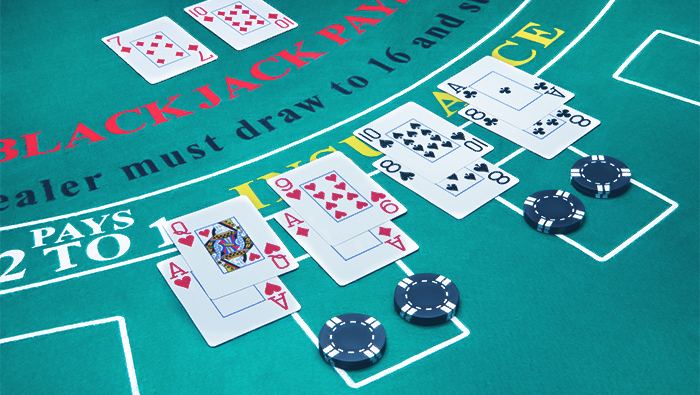 A Guide to Double Down in Single Deck Blackjack

It’s been a little over 60 years since they figured out the optimal strategy for Blackjack. A group of statisticians wrote a paper in 1956, and that paper’s findings were verified in Edward O. Thorp’s 1962 book Beat the Dealer. Now, millions of Blackjack players around the world are learning these strategies, including the option to double down. This is when you double your wager and receive one single card; if you haven’t gone bust after receiving this card, you stand with whatever you’ve got.

If you’re not familiar with doubling down, or you’re still learning the basic strategy, Single Deck Blackjack is the right game to start with. Bovada just introduced a modern version of this game to go alongside the Classic version; try out the following strategies, and you’ll be one step closer to playing perfect Blackjack. At Bovada, you can double any two cards when you play Single Deck Blackjack, and the Dealer must hit on Soft 17.

What Is Double Down in Blackjack?

You can double down after you’re dealt your two hole cards, which means you have the option to double your bet and receive exactly one more card. Then, if you haven’t gone bust already, the Dealer plays, and the winning hand is declared. If you’re playing at a live casino, take however many chips you need to match your original bet, and place them nearby – but outside the betting box. Then use your index finger to point at the doubled bet. Figuring out how to double down at Bovada is much easier: Just hit the “Double” button. No hand signals required.

In both Single Deck Blackjack variants at Bovada, you’re allowed to double on any two cards you’re dealt – and you can double down after a split. Some live casinos will not allow you to double after you’ve split your hole cards. You might also find games where you’re allowed to double after receiving a third card or more.
When to Double Down
This is where the rubber hits the road. As always in Blackjack, the correct double down strategy will depend on how many decks are in the shoe, and the specific rules for the game you’re playing. Let’s take a closer look at the Single Deck Blackjack games available at Bovada, and how to double down in these games for maximum value. In both the Classic and New versions, the dealer must hit on soft 17, which caters to the following strategies when you’re dealt the following hole cards:

If you have 11 in your hand (say, Seven-Four), you should always double, hoping to spike that 10-value card to make 21. Otherwise, follow this guide:

10: Double when Dealer shows a Nine or lower

9: Double when Dealer shows a Six or lower

8: Double when Dealer shows a Five or a Six

With hands containing an Ace, you’ll occasionally double when the Dealer shows a low card (Six or lower). If you’re holding Ace-Six, always double against a low card. Here are the other times to double:

19: Double when Dealer shows a Six

18: Double when Dealer shows a Three, Four, Five or Six

In Single Deck Blackjack games where you’re allowed to double after splitting, like the ones at Bovada, there’s only one pair you should double first: a pair of Fives. This should only be done when the Dealer’s up-card is a Nine or lower, just like you would with any other hand worth 10. If you have a pair of Fours, split instead when the Dealer shows a Four as well as a Five or Six, and hit otherwise.

The doubling plays listed above are mathematically proven to maximize your return playing Single Deck Blackjack at Bovada. They’re part of what’s known as the basic Blackjack strategy – although that’s a bit of a misnomer. Learning all the subtle differences between these optimal moves can take some time. When you’re just starting out, you might want to consider using a simplified Blackjack strategy that’s easier to remember, so you’ll make fewer mistakes trying to implement it. There will be a few plays that you’ll make sub-optimally with a simplified strategy, but only a few.

Here’s one recommended simplified strategy for doubling down in Single Deck Blackjack:

That’s it. Again, using this simplified double down strategy will leave a little money on the table, but it should protect you from even greater losses while you’re still learning the game. The Blackjack double down may appear risky in the end, but in very specific situations, it’s the best play to make – and you should learn all these situations if you want to get the most out your Blackjack sessions. Memorize them, try them for free using the Practice Play mode at Bovada, and you’ll be one step closer towards “Blackjack Expert” status.