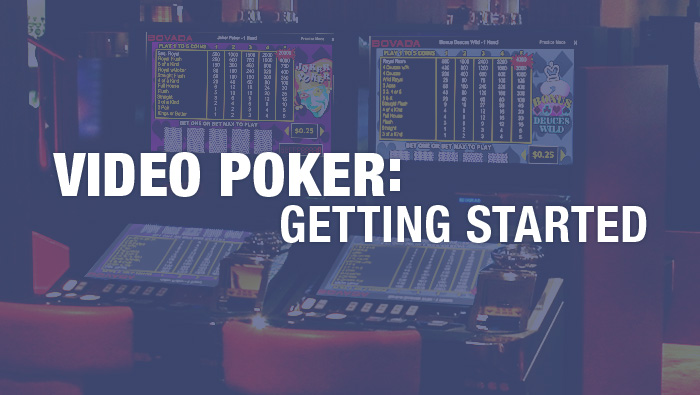 So you’ve figured out the basic rules of video poker, and you’re ready for some action. But where to begin? As with any casino game, your best bet is to practice at home, using play money. Each of the 17 different video poker variants at Bovada Casino has a “Practice” mode that allows you to play for free.

Since Jacks or Better is the standard for video poker, it’s a good starting point – specifically, Jacks or Better 1 Hand. Other variants allow you to play more than one hand at a time, which is something to work up to. When you open the game, you’ll see the pay table at the top, and three buttons at the bottom: Bet One, Deal, and Bet Max. Start pressing buttons and playing hands to get familiar with the game. Don’t worry about results. This is practice.

Once you’ve got the mechanics down pat, it’s time to start thinking about strategy. We’ll go into this in detail later on, but for now, think about the game in terms of risk and reward. The bigger hands like Royal Flush deliver the highest payouts; however, they’re also the hardest hands to make. Depending on the cards you’ve been dealt and the pay table at your machine, you might want to draw to a weaker hand that you’re more likely to complete.

Here’s an example: You get dealt a hand with a pair of Twos, along with a Three, a Four, and a Six. You could get rid of a Two and try to draw a Five, which would complete a straight and earn you four coins on a one-coin bet. But there are only four cards out of the 47 remaining that would help you. Instead, you should keep your Twos and get rid of the other cards. You might get a set of Twos for three-coin payout, or you could end up with Jacks or Better (one coin), Two Pair (2), a Full House (9), or even Four of a Kind (25).

The payouts for each hand increase systematically with every additional coin you bet, and you can bet up to five playing Jacks or Better. If you have the bankroll, it makes sense to hit the Bet Max button, since you’ll get the massive 4,000 payout if you land that magic Royal Flush. We’ll also talk more about bankroll management as this series rolls on. In the meantime, practice makes perfect.