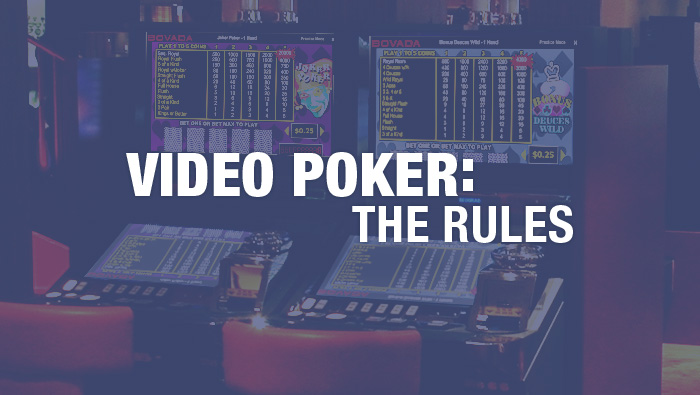 Video poker has been around in some form or another since the 1970s, carving out a healthy piece of real estate in casinos around the world – and online, too. If you’re a new player, you might find video poker less intimidating than its “real-life” counterpart. But first, you have to learn the rules.

There are a few different variants of video poker, but all are based on the standard 52-card playing deck. You place a wager, hit the “deal” button, and receive five cards at random. This is draw poker, so you get one opportunity to dump as many cards as you like (anywhere between zero and five, inclusive) and have them replaced. Then your hand is complete. If you have a strong enough hand, usually a pair of Jacks or better, you get paid according to the table shown in the game. Jacks are typically worth even money; a Royal Flush can return 800 times your original bet.

The Wild Ones
The most popular variants of video poker tend to involve wild cards. There’s Deuces Wild, where all the Twos in the deck can be used to represent any other card. And you may be familiar with Joker Poker – they even made a TV gameshow, The Joker’s Wild, based on it. In this variant, a Joker is added to the 52-card deck, and once again, it can stand in for any other card. Five of a kind is possible in these games, but you’ll need more than just a pair of Jacks get paid, according to the standard table. You need at least a pair of Kings.

Other variants will give you higher payouts for certain hands – these games often have “Bonus” in the name. Bonus Poker is the same as Jacks or Better, but you get paid more for Four-of-a-Kind. Double Bonus gives you more money if you hold Four Aces. Then there’s Double Double Bonus, which has different payouts for different ways of hitting Four-of-a-Kind.

Now that you have the basic rules down pat, you’re almost ready to play some video poker. In our next chapter, we’ll tell you how to get started – which games you should play, and how you should work on getting better. Until then, best of luck at the machines.